In the interests of full disclosure, I probably should start by saying that, technically, Rails Test Prescriptions was not actually featured on this week’s MacBreak Weekly.

I’ve been a regular listener to the MacBreak Weekly podcast almost since it started, and recently I’ve taken to listening to the show while walking to the train but switching to the video version when I get on the train.

This week, MBW host Leo Laporte chose the Ruby Pickaxe book as his pick of the week, calling attention to the $10 sale that was just ending. As Leo shows the Pragmatic website on the screen, and talks about how Pragmatic has the best programming books. Right as he does that, he scrolls down the Pragmatic home page, and by total luck, Rails Test Prescriptions is right there in the random carousel of books on the home page. Yay! 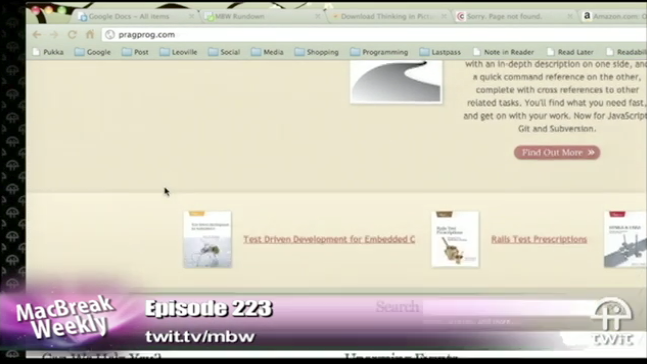 Hey, I know it’s not a real mention or anything like that, and that I’m probably the only person in the world who even noticed. But it made me smile sitting on the train riding home this week. I’ll take that.