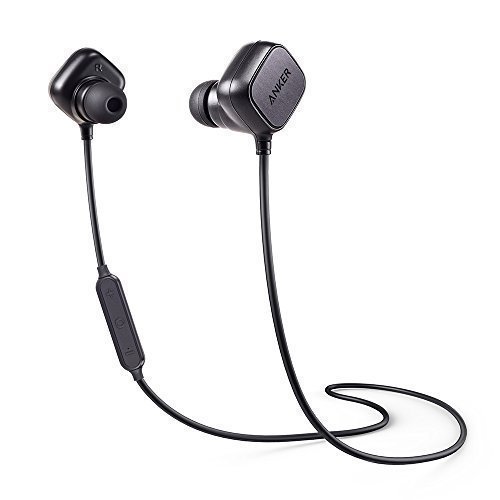 So here’s my thing about headphones. I lose them or damage them quite a bit, your classic run them through the washing machine or such, and I don’t have very well trained ears. So I tend to buy cheap ones with the understanding that I’ll replace them pretty often. For the last few years, my go-to has been whatever The Wirecutter says is the best cheap in-ear bud.

That said, I do like the convenience of bluetooth wireless, especially when I’m commuting and the cable would have to run around bags, jackets and the like. So when The Wirecutter said that these Anker SoundBuds earbuds were the least-bad of the cheap wireless options and they were on a one day sale for $22, I took the deal.

Here’s a more detailed review than they probably deserve:

Physically, these buds are a little unusual, the earbud part is attached to what is a slightly smaller than half-inch plastic cube. My package came with six, yes six, different earbud tips, four sizes of a closed-ear model, and two sizes that block less of the ear, supposedly the closed-ear sound better. Not only that, but they come with three sizes of a rubber square that goes around the cube with a hook designed to keep the bud in the ear better.

The Wirecutter review says that many of their reviewers complained about the fit. I must have weird ears, because I find them a lot more comfortable and stable than most other earbuds that I’ve used, wired or wireless. I think the smallest size of the tip is smaller than other models, and it fits my ear nicely. I found the rubber casing really hard to assemble, but as it happens, I also found the headphones much more comfortable without them. In my experience of about two weeks with them, they are pretty stable in my ears. The control is easy to use.

I find the sound and connection to be a little flakey, but basically consistent with being inexpensive bluetooth earbuds.

The sound is perfectly fine for podcasts, and I find it generally okay for music, though I suspect that somebody with actually trained ears would find it wanting. FWIW, the Wirecutter review describes the sound as “not too bad”, “cheap”, and “inoffensive”. So, you know, high praise indeed. One weird problem I had was that with a very small number of my music files, the sound gets clipped and static-y as though the levels are too high. Not sure why, there doesn’t seem to be a pattern to where it happens, and no other sound device I use has this problem.

As for connection and range, I can easily get about 15 to 20 feet. They are spec’ed to 33, I think, but I don’t think I’ve gotten that in the wild. The connection is often solid, but a little inconsistent. I’ve had a few times where it seems connected but doesn’t play audio and I’ve had to unpair and re-pair it, which at least it does quickly. I’ve also had modes where the connection gets quiet every few seconds, or gets really choppy, but usually re-connecting fixes it. Overall the connection is noticeably less consistent than the $55 bluetooth earbuds these are replacing, but not so bad that the usability is really affected. 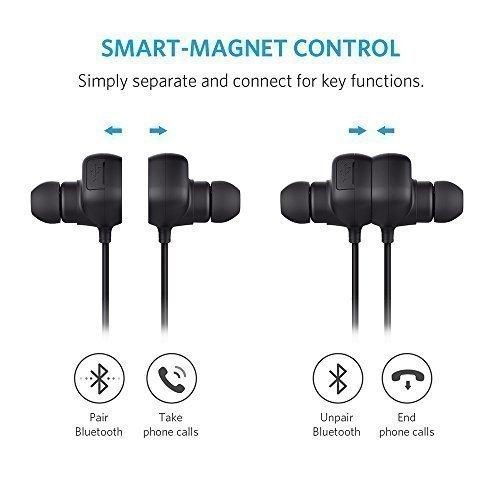 Anker claims eight hour play time on the battery. I haven’t run the battery totally down, but that seems consistent with my experience, which is that about three hours of use drops the battery to about 60%. The battery life is way better than the $55 ones, which is nice.

The SoundBuds’ most unique feature is the magnet. A problem with many bluetooth headphones is that the UI to turn them on and off is a pain, typically it’s a long press of the play button or something, and it’s often just irritating. The SoundBuds are magnetic, the two cubes for each ear stick to each other back to back. When they are separated, they automatically turn on (and attempt to pair with the most recent device they connected to), and when they are re-attached, they turn themselves off. If they separate and don’t connect for two minutes, they power down.

It’s a very elegant mechanism that works great in many situations. Putting them on, for example. They usually have turned themselves on and connected in the time between when I separate the ears and when I have them in my ear. That’s convenient. Normal shut off is also quick and easy. (The play-pause and volume controls are large and easy to hit, which helps.)

Storage is a little tricky, I often accidentally detach the magnets putting the SoundBuds away in my bag. It’s also hard to charge them without detaching the magnets. They don’t seem to have anything like an airplane mode, so you always turn them on when detaching, and it sometimes seems like they get confused if you turn them on and off too quickly. Overall, though, I think the magnet thing is good for me, if you are frequently going to have them in a place where they will get jostled, though, it might be a problem.

Overall, a nice investment for $22, current price is $34 as I write this, which still isn’t bad. If you are a stickler for sound quality, these will probably be unsatisfying, but as a listen to podcasts on the train device, they are inexpensive and work pretty well.