I haven’t written about my writing setup, tools, things like that in a while, and I’ve got some show and tell.

Here’s my current mobile writing setup – really, my preferred writing setup if I’m not coding or otherwise doing something that requires a full operating system. 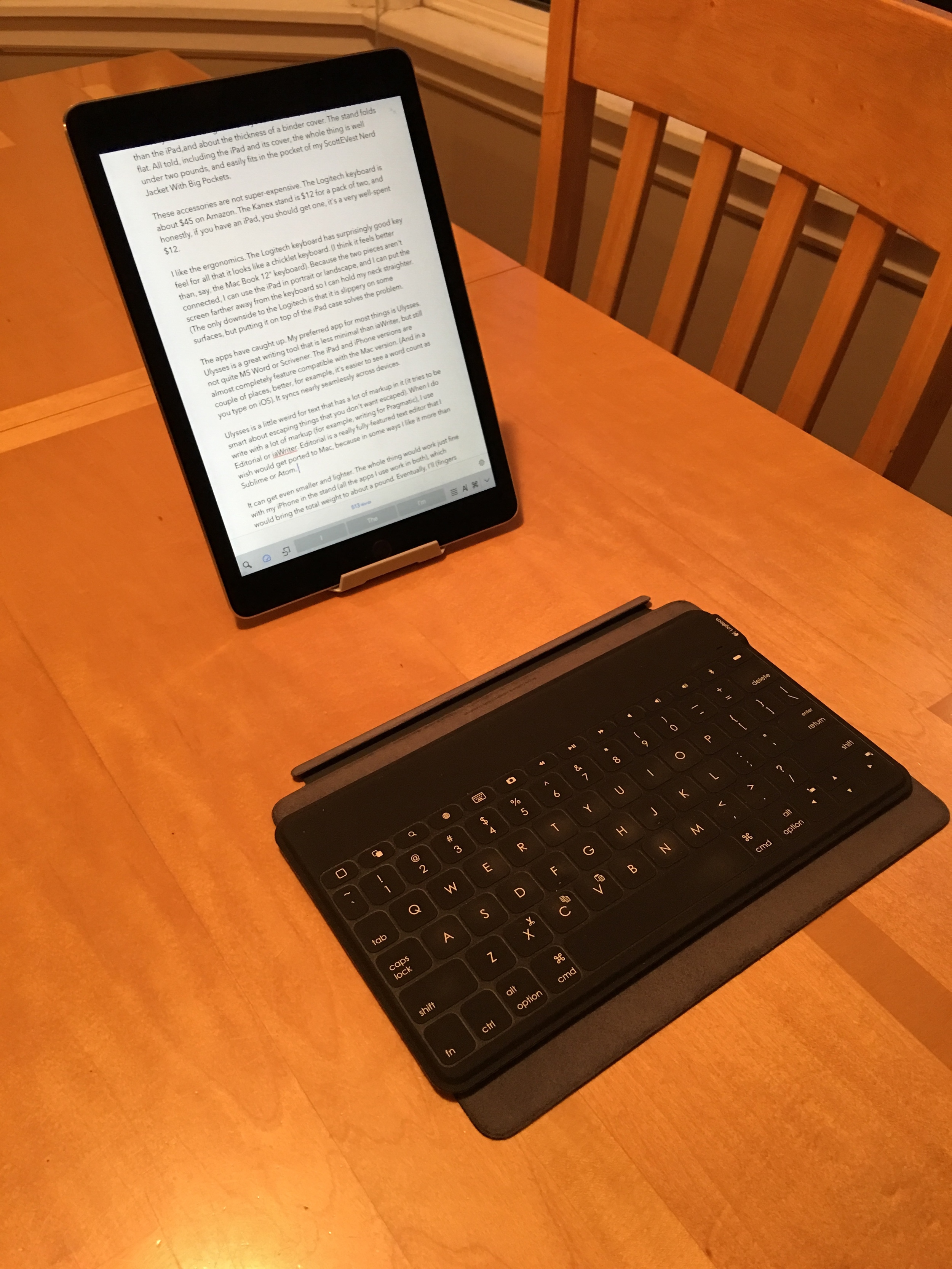 That’s an iPad Air 2, the Logitech Keys-To-Go keyboard, and a Kanex plastic stand that you can only kind of see.

It’s really small and light. The keyboard is six ounces, and is smaller than the iPad,and about the thickness of a binder cover. The stand folds flat. All told, including the iPad and its cover, the whole thing is well under two pounds, and easily fits in the pocket of my ScottEVest Nerd Jacket With Big Pockets.

These accessories are not super-expensive. The Logitech keyboard is about $45 on Amazon. The Kanex stand is $13 for a pack of two, and honestly, if you have an iPad, you should get one, it’s a very well-spent $13.

I like the ergonomics. The Logitech keyboard has surprisingly good key feel for all that it looks like a chicklet keyboard. (I think it feels better than, say, the Mac Book 12” keyboard). Because the two pieces aren’t connected, I can use the iPad in portrait or landscape, and I can put the screen farther away from the keyboard so I can hold my neck straighter. (The only downside to the Logitech is that it is slippery on some surfaces, but putting it on top of the iPad case solves the problem.

The apps have caught up. My preferred app for most things is Ulysses. Ulysses is a great writing tool that is less minimal than iaWriter, but still not quite MS Word or Scrivener. The iPad and iPhone versions are almost completely feature compatible with the Mac version. (And in a couple of places, better, for example, it’s easier to see a word count as you type on iOS). It syncs nearly seamlessly across devices. Also, it’s become a lot more common for apps to support keyboard shortcuts on external keyboard. (Tweetbot added arrow keys to navigate and it made me very happy.)

Ulysses is a little weird for text that has a lot of markup in it (it tries to be smart about escaping things that you don’t want escaped). When I do write with a lot of markup (for example, writing for Pragmatic), I use Editorial or iaWriter. Editorial is a really fully-featured text editor that I wish would get ported to Mac, because in some ways I like it more than Sublime or Atom.

It’s not perfect. I still can’t really code on it. I tried to use a combination of a Digital Ocean droplet and Coda, but it wound up being a lot of work keeping the droplet functional. Multitasking on the iPad has gotten a lot better (split screen is very nice), but there are still a few tasks coordinating things that are a little awkward. For example, I need to bring in a bunch of product URL’s as I finish this post, and that’s still kind of a pain relative to how it would go in the Mac.

Editing existing writing has gotten a lot better, but the precision of a mouse is still missed when I’m moving text around. The fact that it’s three pieces is occasionally awkward. It doesn’t work on my lap, then I have to use the software keyboard, which is actually not that bad.

It can get even smaller and lighter. The whole thing would work just fine with my iPhone in the stand (all the apps I use work in both), which would bring the total weight to about a pound. Eventually, I’ll (fingers crossed), be able to swap the keyboard out for a WayTools TextBlade, which means I’d be able to carry keyboard, phone, and stand in normal pants pockets.

That’s kind of a big deal, it gives me the same kind of portability for writing that the iPod gave for music or the Kindle does for reading. I definitely noticed that I was reading more once I started using eBooks, clearly because the fact that the Kindle (or Kindle app) was basically always on me allowed me to read in times and places without the logistics of having to carry around the book I’m reading.