So, I’ve been writing technical books for about ten years. What can I say about that time overall? 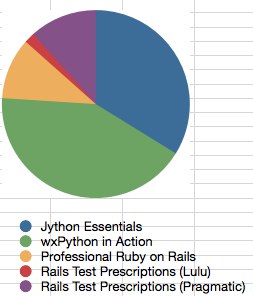 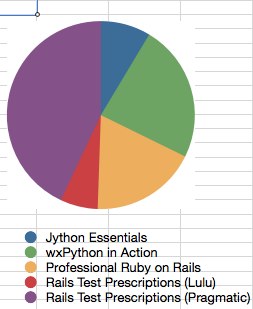 Before I give the answer, please note that there is basically no correlation between the values in each chart. You’d expect that to mean that the two charts are about completely unrelated data, say time spent on each book versus best Amazon rank, or something.

Now, you’d expect the sales and money heading to the author to be roughly consistent with each other. At least, I would. Let me explain why this isn’t so, I hope this will be a kind of interesting glance at the twilight economics of publishing, or why Pragmatic is different from other publishers.

By way of context, I should mention that the absolute total count of all these sales is a number of people that could comfortably fit in Wrigley Field.

You’d think that I’d be able to put my finger on the exact number of sales for each book. That’s actually not the case. Most of the sales numbers are approximate in several different and interesting ways:

I get quarterly statements for Jython Essentials but they don’t include a running total of how many books have sold – the pie slice here is a stone cold guess.

I’m not 100% sure, but I have reason to believe that the Jython book was somewhat below the average sales for an O’Reilly Animal book at that time, although it’s also pretty specialized, so I don’t know what their expectations were. There were preliminary discussions about doing a second one that never went anywhere, so that might be a clue.

The wx book sold more or less what Manning expected (they told me their expectations right before launch), maybe a hair more by now. Pro Rails, frankly, was a disappointment (at least to me), although I think my expectations may have been unrealistic.

Similar context on the dollar numbers: the absolute value here, again, isn’t all that high given that this is about a decade’s worth of writing. You could kind of buy a car with it, but not a “chicks dig the car” kind of car. (I’m not complaining, mind you, I love writing technical books. Just pointing out that I’m not likely to abscond to the Bahamas on my writing income anytime soon.)

The discrepancy between sales and dollars is partially explained by co-authors. For Jython, the author royalties were split 50/50 with a co-author. For wx, I am on the large side of a 66/33 split. For both wx and Pro Rails, this total does not count 15% that was given to an agent. (Which was well earned, by the way, not least because neither book would have happened without the agency.) For the Pragmatic version Rails Test Prescriptions, this is direct sales from the Pragmatic website only, it’s too early to have gotten money from other sales.

I should back up. Most publishers pay authors an advance, which is typically paid in installments, with the last installment tied to the final approval of the book for publication. After publication, the author gets a royalty, which is a percentage of the publisher’s net sales, and for tech books is typically around 10%. However, the author does not get any royalty money until after the royalty total exceeds the amount of the advance, which is literally an “advance” against future sales. When a book has reached the point where the author is getting royalties, the book is said to have earned out.

The wx book earned out almost immediately, in part because the advance was relatively low compared to the price of the book. The Jython book, somewhat to my surprise, earned out after about seven years, and I now get about $10 a quarter from O’Reilly. Pro Rails will never earn out, unless the book becomes retro and hip.

Pragmatic works a little differently. They don’t pay an advance. Instead, they take their net sales on the book subtract per-book shipping costs plus a couple of other one-time costs, and split the remainder 50/50 with the author. That means a significantly higher per-book payment for the author, and explains why Rails Test Prescriptions is the most money I’ve been paid for a book.

Here’s why self-publishing is viable for technical books: In the Lulu self-publish model, I get 70% of the price of the book. Compare to, say, the Jython book, where I got half of 10% of the net cost, or about 2-3% of the gross sales price. The Lulu book earned me about as much as the Jython book. It’s also a fairly quick turnaround, although the major ebook channels are not very good at managing the process if you continually update a book.

Here’s why publisher-publishing is still viable for technical books: Even with making more money per-book, I still made more total money, and reached a lot more people through traditional publishers. Many things that I have no talent or desire to do – editing, cover design, marketing, indexing – were managed by my traditional publishers. (Well, Manning did make us do our own index.)